Norwich has intriguing cobble streets, interesting alleyways and historic sights such as the Castle and Cathedral, all within easy reach of one another, making it an easy and enjoyable city to explore on foot.

This walk incorporates all the well-known places of interest in the city centre and takes about 1 ½ hours – longer if you stop and visit any of the historic buildings en route.

The walk starts at the main steps of the City Hall, overlooking the market with the 12th century Castle in the background. Once through the graveyard of St Peter Mancroft Church, turn left into Gentleman’s Walk. Cross over the pedestrianised street (which is one of the city’s busiest) and walk through the Royal Arcade.

Turn left along Castle Street and you will catch a glimpse of the Castle on your right. From Castle Street you will come to London Street which you follow until you come to a pedestrian crossing. Continue straight over, along Queen Street, turning left at the end of the street into Tombland.

When you reach the Edith Cavell Memorial use the pedestrian crossing to enter Cathedral Close through the Erpingham Gate. Turn right by the statue of Admiral Horatio Nelson, who was born at Burnham Thorpe in Norfolk in 1758. Walk down the path, across the Upper Close, and follow the road to the left through the Lower Close to Pull’s Ferry, a 15th Century arch and house marking the point where the canal met the River Wensum.

Take a left past playing fields of Norwich School. Cross Bishopgate and go through the car park of the public house to the Cow Tower. Follow the footpath and branch off to the left to the Adam and Eve, one of England’s oldest pubs, dating in part to 1247. Carry on and cross over Bishopgate with the flint wall of the Close on your left. Carry on along Palace Street and cross Tombland at the Maid’s Head Hotel.

Veer right along Wensum Street to Elm Hill, which is a quaint and picturesque part of the City. Turn left up Elm Hill’s cobbled street to Prince’s Street and turn right. Carry on and cross St George’s Street and use the pedestrian crossing on St Andrew’s Street, turning right past St Andrew’s Church and then left into Bridewell Alley. Cross over Bedford Street, up Swan Lane and into London Street.

Turn right to complete the walk at Guildhall, which is an ornate building dating from the early 15th Century and was the seat of government in Norwich for five centuries.

View this walk with MapOMeter 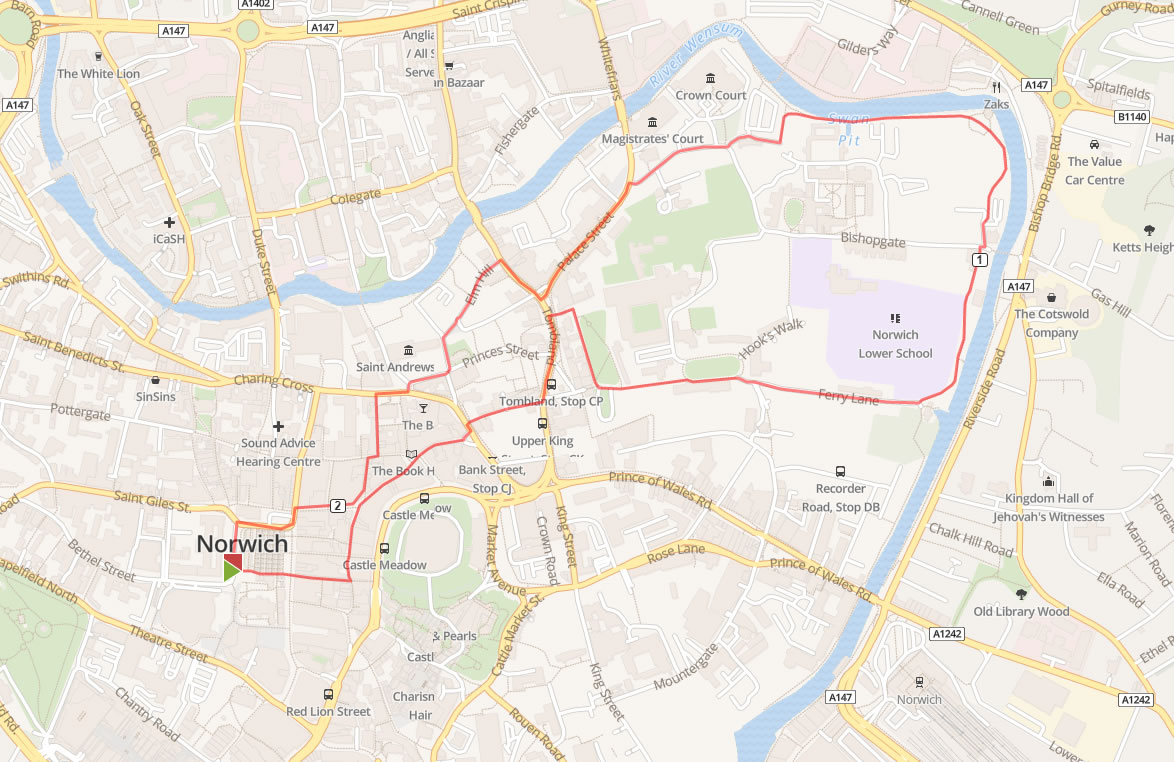 This route takes you alongside part of the ancient City wall as well as the old manufacturing area of King Street. En route you pass the Music House, as well as Norwich Union’s grand architectural building in Surrey Street. Allow approximately 1 ½ hours.

The walk begins at the steps at the rear of the market, with the City Hall directly behind. Walk down the steps, keeping to the right of the market stalls. Cross over Gentleman’s Walk and into Royal Arcade, which dates from 1899. Turn right out of the Royal Arcade and into White Lion Street, following the road round to a pedestrian crossing on Red Lion Street. Carry on up Timberhill, which was once the site of a timber market, a now pedestrianised walkway with shops on either side.

Once past the Church of St John Timberhill go over the first pedestrian crossing and turn left and over the second. Carry along Ber Street until at the top of Thorn Lane and descend into Rouen Road and cross over. Turn right and then left into St Julian’s Alley, continuing until into King Street, a once thriving manufacturing area. Continue to the right along King Street and you will come to the Music House, a whitewashed flint house which is the oldest domestic house in Norwich, dating from about 1175 AD.

Carry on past the Ferry Boat Pub until you reach the newly constructed Novi sad Friendship Bridge. Turn right to cross Rouen Road and then left until you come across steps to your right. Climb this steep flight of steps to see the ancient ruins of the city’s former defences. Walk along the path alongside the battlements to Carrow Hill and turn right into Bracondale. Carry along Bracondale and into Ber Street and then take a turn left into Finklegate, following the path beside Notre Dame High School into Surrey Street. To your left will be a row of restored Victorian houses and, just beyond, is one of Norwich Union’s offices, Sentinel House, a fairly modern building with a distinctive spire.

Continue along Surrey Street, cross over at the traffic lights and you will pass a six storey group of town houses which were built in 1761 by Thomas Ivory. Next you will pass Norwich Bus Station and further down on the right is probably one of Norwich Union’s most impressive buildings, built in 1903. Designed by George Skipper, its magnificent interior uses many types of marble.

This completes the medieval walk around Norwich.

View this walk with MapOMeter 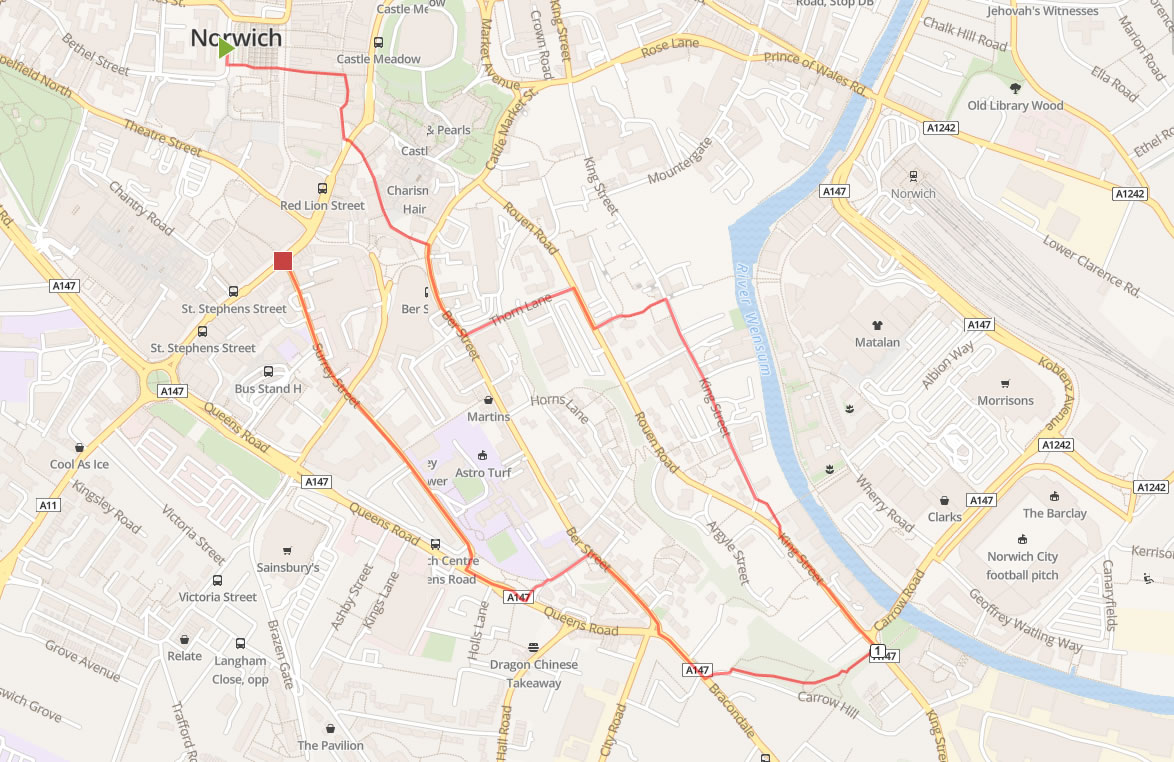 This tucked-away rustic and rather quirky dog-friendly hideaway sits in a very quiet location only a few minutes’ walk to all the eateries, cafes and shops that make Thornham so desirable for a short break or longer stay.

This secret little Norfolk hideaway is tucked away on a quiet lane above the village of Cley and has the most wonderful open rural views looking down towards the village and coast. Take a seat inside or out and enjoy your own private view of a wildlife spectacular. Romantics and birdwatchers make your reservations now!

A fabulous brick and flint barn conversion found in a peaceful village location, with a private south facing sun trap of an enclosed courtyard garden. There's a pub and well stocked shop within a short walking distance, and it's just a twenty minute drive to the coast at Wells-next-the-Sea. Perfect!

Norfolk + Suffolk Tourist Attractions is the trade association for tourist attractions in Norfolk and Suffolk.